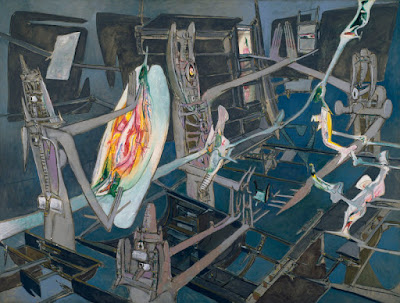 In Matta’s “Wound Interrogation,
a Malangganesque robot thrusts a flattened palm against
a large pulpy vaginal wound hung before it.
Matta comments:
“The wound is separated from human being & subjected to torture of intense examination by heinous machines. The bloody red insides of wound convey a life striving to exist, while grays & blacks of demon robots remind one of an industrial plant.”

DO (a chorus chants) THAT IS WHY HADES IS SO RICH

Can I interrogate this region of dense, cold air without light?

“You can, but my icy lace is blinding
& my knuckles, feeble from your Herculean viewpoint, are
hurricane poundings, tidal flail.
I am dream jaguar which you created so as to, while
lurching out of bed, crash onto floor.
I am the kobold which bit your ankle as you climbed out of a cave.
While you were driving home that night I bit again
so that you smashed into a ditch & broke that ankle twice.
I am, in other words, untapped center, shifty ‘always.’
In my casket chloroform are blind troll suns, split
gourds of brain jam, simmering golden sweat known as world wars.
You glimpsed my erection in Lascaux’s “Shaft.”
I became a bird man that you might watch me scram via
a bison’s vagina-winsome hanging guts
There never was a beginning!
All is nexus & midriff cast on an alabaster plain of marauding
tarantula-shanked camels…”

The frailty of being holed & rampant with closure.
Blake’s angels feast on my neck
as strapped to this fuselage of honking verbs I watch Hades
now a zyzzogeton munching on alfalfa alpha.

For that matter, what is deliverance?
To find oneself present at Pluto’s cornucopian spread & grasp
that one must not pluck a single grape?

The first Persephone pumped time out of her held-aloft bison horn,
& with that image phantom impregnated herself!

Between the cracks in the time board,
to write from a double periphery, in swerve with the labrys…

“Not to subject change,” Hades quipped,
“but what bugs you most about America today?”

One: The suppression of horrifying truth of 9/11 assault  (more appropriately referred to as “The Pentagon Three Towers Bombing”) infests American soul with a stifling sense of unreality charged by rivers of blood flowing alongside Euphrates & Tigris through a destroyed & failed state that may never again be reconstructed. I note that orwise responsible political thinkers like Oliver Stone & Bill Maher will not even engage this ongoing nightmare.
The truth of The Pentagon Three Towers Bombing is, like an undiagnosed plague, lodged in American subconscious. This truth is now lie veneer of our dailiness. There is a knotted veil in our eyes building rancor where re could be revelation.

Two: Since I have been writing, translating, & editing for over 50 years, I have to deplore degree writing programs that are in process of substituting creative writing for the art of poetry. In 1994 I wrote: “Quotational Reality is new Purgatory making each desire artificial.” My comment appears to identify Kenneth Goldsmith’s aesticized plagiarism.
The first poets, facing incomprehensible division between what would become culture & wilderness, taught mselves how to span it & thus in such caves as Chauvet & Lascaux respond to ir “wound interrogation”. Our key distinction may become that of being first generation to have written at a time in which origins & end of poetry became discernable.

Dream is a fire burning alone out of contact with
brushwood of my body.
I study it as Heraclitus studied gods endlessly changing soulscapes,
the squirrel face in a cloud simultaneously a fat weeping raccoon.
Sky stigmata. Archaic smile of brave.
In the webs of Ananke the shaman struggling to vanish into
the dream flow of his avatar radiance.

An image is fire
around which language appears to be
tightly-packed ash.

James Hillman: “I and soul are alien to each other because of soul’s domination by
powers, daimones and gods”  Soul is molten protocol.

Humankind is timed, as if with a timer, by & for apocalypse of immortality.
We are too far into the rage for, & range of, power versus the suicidal
hubris of millions willing to immolate to damage imperium & enter
their own immortality

To think of tered mandala of hand,
radial glory of fist unhooked from its fury.
Vallejo: “Our brave little finger will be big, worthy,
an infinite finger among fingers.”
Vodun thumb-post attended by 4 hexed dwarves.
Palm pressed to Matta wound, to Gargas wall:
new human negative: I am not    that is.

I dream because I first had hands.
And in dream tonight I held my fire in my hands,
my fire with Caryl’s eyes!
Her dearest eyes peering out of my burning!

Clayton Eshleman was born in Indianapolis, Indiana, 35. He has a B.A. in Philosophy and an M.A.T. in English Literature from . He has lived in , , , , , , , and . He is presently Professor Emeritus, English Department, . Since 1986 he has lived in with his wife Caryl who over past forty years has been primary reader and editor of his poetry and prose. His first collection of poetry, Mexico & North, was published in Kyoto, Japan in 1962.

From 1968 to 2004, Black Sparrow Press brought out thirteen collection of his poetry. In 2006, Black Widow Press became his main publisher and with The Price of Experience (2012) has now brought out seven collections of his poetry, prose, and translations, including, in 2008, The Grindstone of Rapport / A Clayton Eshleman Reader. Wesleyan University Press has also published six of his books, including Juniper Fuse: Upper Paleolithic Imagination & Construction of Underworld  (2003), first study of Ice Age cave art by a poet. Three book length poems, An Anatomy of Night, The Jointure, and Nested Dolls were published by BlazeVOX in 2011, 2012 and 2013. Eshleman has published sixteen collections of translations, including Watchfiends & Rack Screams by Antonin Artaud (Exact Change, 1995), The Complete Poetry of César Vallejo with a Foreword by Mario Vargas Llosa (University of California Press, 2007), and Aimé Césaire: The Collected Poetry (co-translated with Annette Smith, University of California Press, 1983). Recently Wesleyan University Press has brought out two more translations of Césaire: Solar Throat Slashed and The Original 1939 Notebook of a Return to Native Land, both co-translated with .

Eshleman also founded and edited two of most innovative poetry journals of later part of 20th century: Caterpillar (20 issues, 1967-1973) and Sulfur (46 issues, 1981-2000). Doubleday-Anchor published A Caterpillar Anthology in 1971 and Wesleyan will publish a 700 page Sulfur Anthology in January of 2016.

Recent publications include a translation of ’s Sakra Boccata with a Foreword by Raúl Zurita (Ugly Duckling, 2013). In 2014 Black Widow Press published Clayton Eshleman / The Whole Art, an anthology of essays on Eshleman’s work over the decades, edited by Stuart Kendall. In fall of 2015, Black Widow brought out Clayton Eshleman / The Essential Poetry 1960-2015 and in 2017 Wesleyan will bring out a 900 page bilingual edition of The Complete Poetry of Aimé Césaire, co-translated with A. James Arnold

In her Introduction to Eshleman’s Companion Spider (Wesleyan University Press, 2003), Adrienne Rich wrote: “As a poet and translator, Clayton Eshleman has gone more deeply into his art, its processes and demands, than any modern American poet since Robert Duncan and Muriel Rukeyser… Eshleman has written on the self-making and apprenticeship of the poet, and of the poet as translator, as no one else in North America in the later twentieth century.” His poetry has been featured in both volumes (1994 and 2013) of the Norton Postmodern American Poetry.