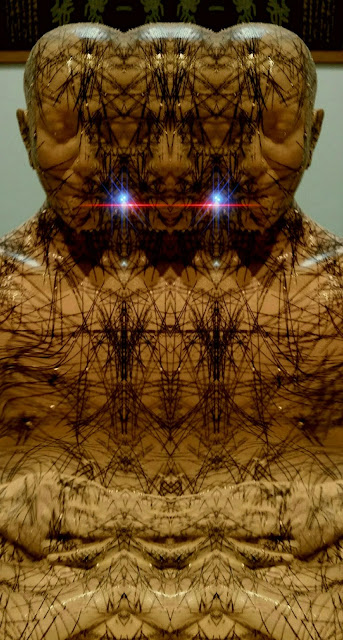 The photographs you are taking now
will melt in the exploding sun.

The recordings you are making now
sound like all the others: ash.

There is nothing new under the sun
and soon there will be no sun.

will not be for much longer.
I’ll get used to your burnt-out eyes.

The Underachievers did everything they wanted to,
which wasn’t much. The Unstoppable Achievers
made life difficult for everyone, were always
in the way, trying something new, making
or doing. Why didn’t they ever sit down?

The Over-Achievers were unbearable,
the way they displayed their prizes
and medals, the silver cups on the shelves,
framed certificates on the wall.
What weren’t they good at? “Dying,

perhaps,” said Nurse Ratched, flicking air
out of the syringes. The Unreliable Landlord
looked the other way and we buried them
with the Colonel. The Unstoppable Achievers
felt they did better now, the Underachievers

left the TV on and we gently suggested
to the investigation team that it was probably
their fault, that they were sure to be implicated.
Look at my qualifications now, the things I
have achieved. I am a renaissance man!

The Died of Fits
doing battle
with The Demon of Annihilation.
No human heads

drink affect: cause
of seize. He defends against
the toxic by pulping
rank.

Jinns intervene, mediate
in lieu of suit: these tests of ruin
bring famine

to the obese, wake the temple
from sand-sleep: hives.
R. Apo of Paic
tilts in prayer.

Fear-radiance is prickly
with war scrolls.

Remember the nephilim as mock
deluge of grunt? I remember
standing over the body.

I remember paqid and videbamur
sucked from the vacuum
of Hebrew and Latin.

Race the human super
to heels, flat soles: to pay
a Does the Thing
hurts.

I un-earn from far away, out,
as progeny
of the Elioud.

I can’t resist the obituary:
we influencers.

Select the slew. No one else
could unclean choose
and shed the blood-fill.

Here’s what to pay: blood money
and 90 per cent of your crop.
No excuses, no hard-up stories,
no “what’ll my kids do for breakfast?”
schtick, just what is demanded.
Never forget how magnificent we are,
how hungry for everything, how
erudite, witty and learned,
despite all appearances. Dogsbody
is as Dogsbody does. I wouldn’t
wipe the floor with him.
But this time, perhaps, I will.

Vintage stutter to rival Endgame
with Doom Headed Three’s Doomhamm,
Doomclov, Doomnagg and Doomnell
absent cameos though quadrilingual
and late to the launch.

We’ve been banned from the Doom
Sultan’s cotillion—how just ugh and omg!
No weak of mourning for these progenies.
Doom spawn have no say, even to returning.

We appeal on their behalf, but they don’t sever
well, nor evenly. Does Doom Sultan have a name?
Doom Sultan Brorig Tiara Kcetteb III.

This is his first and last appearance.
To speak his name is to be hung
by the larynx. Screw progenies,
how about black sheep? Get in line
with all the other hemizygous.

One of them will break through,
won’t they? One among millions
of diploids, most likely doubling back
through a moebius. Is our vintage stutter
hopeless? Will they catch the accomplice,
shifting here as copycat? Not is our lifetime,
before the crack and the extended threat.

Daniel Y. Harris is the author of The Underworld of Lesser Degrees (NYQ Books, 2015) Esophagus Writ (with Rupert M. Loydell, The Knives Forks and Spoons Press, 2014), Hyperlinks of Anxiety (Cervena Barva Press, 2013), The New Arcana (with John Amen, NYQ Books, 2012), Paul Celan and the Messiah’s Broken Levered Tongue (with Adam Shechter, Cervena Barva Press, 2010; picked by The Jewish Forward as one of the 5 most important Jewish poetry books of 2010) and Unio Mystica (Cross-Cultural Communications, 2009). Some of his poetry, experimental writing, art, and essays have been published in BlazeVOX, Denver Quarterly, European Judaism, Exquisite Corpse, The New York Quarterly, In Posse Review, The Pedestal Magazine, Poetry Magazine.com and Poetry Salzburg Review. He is the Editor-in-Chief of X-Peri.

Rupert Loydell is Senior Lecturer in English with Creative Writing at Falmouth University, and the editor of Stride www.stridemagazine.co.uk  and With magazines. He is the author of several collections of poetry, including Wildlife and Ballads of the Alone both published by Shearsman Books. An artist’s book-in-a-box, The Tower of Babel, was recently published by Like This Press; and Encouraging Signs, a book of essays, articles and interviews by Shearsman. He edited Smartarse for Knives Forks & Spoons Press, From Hepworth’s Garden Out: poems about painters and St. Ives for Shearsman, and Troubles Swapped for Something Fresh, an anthology of manifestos and unmanifestos, for Salt. He lives in a creekside village in England with his family and far too many CDs and books.
Posted by X-Peri at 1:18:00 PM