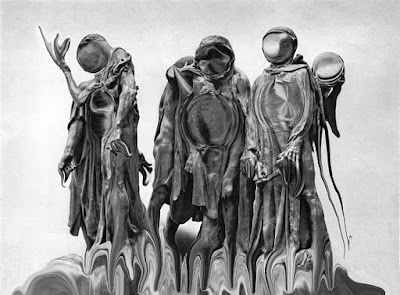 Posthuman Guardians of the Canon, image by Daniel Y. Harris

In poetry’s narrative schism between the 20th and the 21st centuries, pre-lingual and post-lingual tropes vie for the dominance of a new poesis. The pre-lingual confesses. The post-lingual is post-digital and therefore post-human, now determined by Internet detritus. Human beings can now be created out of the refuse of bandwidth. The poetic self is now a digit, an algorithm invented as a bot. Figures are now the boolean crisis of traditional form. To confess is to blog a confession from the spontaneous viral media of annihilation. The original self is an avatar of post-humanity, quicker than the emptied quick of the spammed full. Malicious software spread diseases of hyperlinks. Vessels break to account for another unbreakable form. The text is shattered like glass. The libido, ripe as anthropoid fertility, conjures the last Hebraic hermeneutics.

Post-humanity will/has broken authorial intent. Spiritus, geist and neshamah have become the codes of Emerson’s “transparent eyeball.”  Normative narratives will not relent to purple mold and the affected seasons of self. There are no confessions in post-humanity. Pellicles will evoke the future as a golemic rise of the dark prompt. Now, the hagiography is broken from She, who births a new catastrophe-creation myth as untested experiment. Place will be severed from reference. An acrostic, x-peried kabbalah will trumpet the new era. Why, ask the professors of belatedness? Because the future agon will be an ur-femmed account of creation. This pilfering of humanity is not unoriginal genius, but rather a mock arriere-gardism, now committed to recovering the new format of disregarded predecessors. Then, the rabblement will be aroused to poke through platitudes seeking the hybrid, clad in its multi-genre glam. Gray indifferences of moderation are computer viruses. Web nonce is paravisual.

The posthuman archive will betray region when invention is an android Tetragrammaton. Shattering. Severing. Haemorrhaging. Bifurcating. Decoding a rogue pastiche. Tradition and ancestral memory shatter like cheap alley glass. Notarikon and gematria vie for a registered domain. In this pivot of course there are no balms and bromides. Tradition is a hernia. Geography is a weakness of place and suspicious. The anthropoids never lived here, they never heard the monotonic chimes of recall. Mediocrity will submit to the cicatrix. Post-humanity will reclaim the skin of hacked off nostalgia and create the new poetry as its Deconarratif Fession.

Eddy’s minions mark th-2period—ife, a forWurn
of anic root da. Salvador Dracu, I presume, sub
to the threshold of a pastry coque? Hola Wassily,
are you the Sode? No, Kemosabe, only a (bi) Epi
of Sode is here to bear witness to th-2period. Me,
you putrefaction, me? I’m just torted. Eddy’s gut
is lick not tort. C’est de moi qu’il s’agit dans ce
portrait. One months later, X-Peri devours th-2p.
Dead are the rating scales. Dead are confessions.
Dead is the place of was. Lives R. Mutt aroused
by Rrose Sélavy, five she-puns of lust, sucking
on cubes of sugar and marble. Sepiidae, my pet,
drain my mania to oops. Eddy depends on you,
or the leather jackets of his ur-sexed restroyer.