Nathan Spoon’s “As the Ringing of Bells: A Review of Geoffrey Gatza’s 'A Dog Lost in the Brick of Outlawed Trees.'” 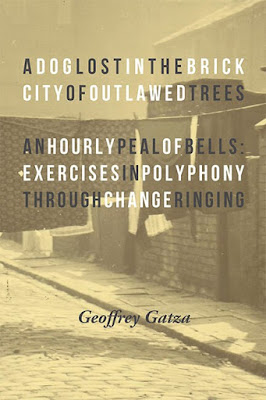 A Dog Lost in The Brick City of Outlawed Trees (An Hourly Peal of Bells:
Exercises in polyphony through change ringing)
by Geoffrey Gatza
The Mute Canary, 2018
$20.00
FULL COLOR


As the Ringing of Bells: A Review of Geoffrey Gatza’s
A Dog Lost in the Brick of Outlawed Trees
by Nathan Spoon

Concrete poetry (or pattern poetry) is “verse that emphasizes non-linguistic elements in it’s meaning, such as typeface that creates a visual image of the topic.” In his new book A Dog Lost in the Brick of Outlawed Trees, Geoffrey Gatza offers 22 concrete poems that are inspired by his many years of appreciating “change ringing”: an English method for ringing church bells. As a result, reading this collection involves following sometimes complex patterns that emerge when, in place of bells and bell ringing, the sounds, words and phrases making up these poems are subjected to predetermined numeric arrangements.

(Also, on a personal note, this is an especially interesting book for me, since I have both a love of patterns and a diagnosis of dyscalculia. To briefly explain, dyscalculia is “a specific learning disability that affects a person’s ability to understand numbers and learn math facts,” which may also involve difficulty with understanding math symbols, memorizing and organizing numbers, as well as difficulty telling time, and counting (learn more here).)

A central aspect of these poems is that they each have been written to be performed in multiple voices. Poems in the first and last section make use of colored text to help differentiate the voices. For example, “Concentrate on the End of the Tunnel” is a poem in three voices.

Taking the first lines of the unique stanzas in order, this poem says, “Dust to dust. Don’t give dust. Don’t give up. Set your sights high. Concentrate on the end of the tunnel.” But, aside from the arrangement of the poem, there is also a pattern within each stanza allowing it to alter and then return to its first line. Here is stanza six:

This gives readers a pattern, applied to the poem’s other stanzas, of 123, 213, 231, 321, 312, 132, 123. Basically, starting from 123, the 1 is moved one space producing line two and one more space producing line three; then the 2 is moved in the same way to produce lines four and five; finally, the 3 is moved in the same way producing line six before returning everything to the original order in line seven. In relation to this pattern, and as coloring of the text indicates, each repetition of “Concentrate” should be spoken by voice one (red), each repetition of “on the voice” by voice two (blue) and each repetition of “of the tunnel” by voice three (orange). This gives the experience, when reading the stanza, of starting from a place of familiar, determinate meaning (“Concentrate on the end of the tunnel”) and then drifting into a space that allows for new possibilities of association between the voices, words and phrases, before returning once again to the familiar and determinate.

Without going into all the details, the wonderful poem “Alpha Zeta” is a single, variegating column in twelve voices using the sounds for all the letters of the alphabet, except for a and y. A closer look at the column reveals that it is made up of seven sections of twenty-six lines, the same as the number of letters in the alphabet. Sections two, four and six have wider lines because they repeat “double u” as a way of sounding out the letter. Each section is made up of thirteen couplets because the opening sound and the closing sound repeats. Here are lines one through six to give an example:

Each of the twelve voices repeats its own sound which alternates between the odd and even numbered sections, so that the voice repeating ‘ef’ in the odd sections switches to repeating to repeating ‘are’ in the even sections.

The repetition in these poems perhaps resembles the repetition of sounds, words and phrases in contemplative practice. A poem like “Draw Up My Prisoned Spirit to Thy Soul” even has overtly spiritual content, although the determinate meaning in other poems is not at all spiritual. For example, the whimsical and ironic “I Hate Capitalism but I Want to Fuck Santa Claus.” Still, reading one of these poems is very much like sitting in a room and listening to the voices of monks or nuns chanting, albeit each in his or her own voice and about a wider array of things.

Just over a century ago, in a dark historic moment, as the Great War was raging, Guillaume Apollinaire was writing the poems included in Calligrammes and excerpts of “Zang Tumb Tuuum” by Filippo Tommaso Marinetti were appearing in various journals. While any mode of verse concentrates and dissipates, comes and goes, it is deeply reassuring to know that concrete poetry, the kind with an overtly experimental bent, is still alive and well thanks to poets like Geoffrey Gatza.