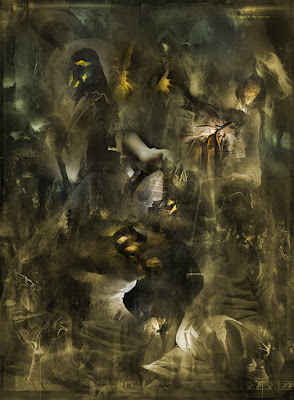 A Phantom Pairing In The Night Hotel, image by J. Karl Bogartte

A Night That Never Ended…

Exile is a distant river, a doorway of telepathic perturbations cracked open like agate of amethyst… The way you gesture excitedly, antelope and annotated, one of Les Silencieux throwing mirrors the way an eclipse shelters the unbearable, the way… this way… her body in sleep resembles the lunatic petals of the first sunlight, scattered by the wind to the four corners… Only that way.

A gown of loons for a pedestal of exact science, a fresh scent caught in a trap, without warning. Through the corridors of harsh projection, for an early morning dalliance, the storm-jewelers are winning objects of delirium... Which IMAGE is yours, when you hesitate, when you resist, or accept, when… light is a phantom body, a memory of invisible movement. Not for the unworthy.

The calyx of a holding pattern spreads Arrival in the middle of the night, Eureka dips into desire. But there is fire before somnambulance and bright fingers. There will be what is now your double reflection, spreading all that I see in you, dear Luminous, your animal neurons wandering near the tenuous side of consciousness. Your name is a doorway, your breath, spinning another constellation. An unavoidable fuse.

Those books on fire, the invisible ones. Psychosomatic and statue-colored. How near you always are, between bodies, specific words… The entanglement of source codes, dazzling signals. Heavy objects, so heavy they splinter, wounding. Real life dazzling out of sabotage, and always the effortless sense of unavoidable presence. Droning. Bursting. Snarling from the earth of the body, blackest dirt, scraps of bone, stained, stars…

Raven unfurls an eerie silver eye for a look of Panther who greens the window with telepathic murmuration.  Watching night, arcing. Your message was a pedestal of arson, a violin face. You collide with a mirror, re-directional as light in very large numbers. Pathos is weaponry. Night, fur. Lamp skinned alive.

Shadow is a magical pet on the outskirts of window-like abruptness. She is the trick of ellipsis… to dissolve, memories of a tangled space untangling… a bookless tumult for an endless narrative…

Dolorosa, fugitive lamp. Sudden phenomenon is the drapery of vexing in and out of bright feathers. Everything trembles at the drop of a hat. The wilderness leaping for eyes heavy with sap and thirst.

The double-faced window of a highland arc, the fearless one, the Archeologist with larval-smoke and teetering, she gestured… She swallows and glows from within. Throws the first fire, with pitchfork urges. Troubles the lorn, translates into aspects of incendiary and babbling, coupling a shadow. You project accommodation with ambiguity and a penchant for heuristic pendulums. Desire is a flash fire clothed in dusk.

The beautiful daughter, the Amaryllis magnifying-glass. Soft spot of the antechamber. Her plume is named for an awkward reflection, while doorways take command of the tides and other explosive devices.

Do not write those words, the ones regarding a taste of failure or indecision. The distance between mind and sunlight is the amount of voices needed to fill the abyss. Your name is Incantation. Your shadow: Salamander. Reflection… Fire.

Night is the Rose of Cadeira and the plumb line of an orphic disguise.

She is axolotl for the revenge of light, you are the spyglass of incandescent messages, drawing exact locations for the secret desiring-machine, the awkward cry of well placed pigments. It is how you spread your uneasy disasters, your ancestry of small stones for amazing entrances…