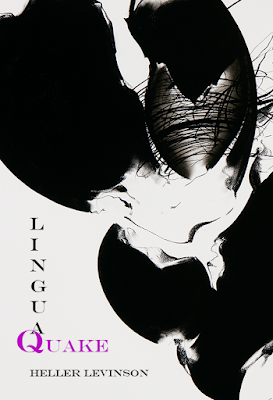 The uniqueness of Hinge, as a post-language innovation can be found in its unwavering study of the term (a given word) through its "application". In doing so, the hingist approaches a term as an archeologist might a fossil or artefact: it is dug up, analyzed, chipped away at, an inventory is made, it is carbon-dated and processed for vital information, a representation is made to project its innate potential etc. In this sense, Hinge does for the word what BpNichol did for the letter (See “H: An Excursion” bpNichol Archive), it poeticizes and re-presents language as a chain of information, moving reflexively as it navigates through the “beautiful quixotic”. This is unique as Hinge is attempting a full-scale poetic study of the term, and as a starting point, this is certainly intriguing, producing poems/applications based around the terms "askew," "seepage," "pathos," "glide," "meander", for example, means language is actually Hinging with itself, and the Hingist, is merely an observer, a scientist.

Jonathan: Heller, how do you choose a term/word to applicate? Could you describe your selection process?

Heller: First off, I wish to congratulate you on a stunning depiction (above) of how Hinge functions. Your insights are enlightening me as well.  Now, your question:  “How do you choose a term to applicate?” is a critical question because it serves to reveal Hinge Spirit by declaring I do not choose the term, the term chooses me.  Any humility that might be attributed to me arises from the fact that I have very little (aside from being available) to do with the process.  I see myself as a Hinge carrier pigeon.  We have a sterling example of how a term materializes from our former interview:  “As you know, Hinge insists upon the ongoing & extensive.  “Ongoing” does Not refer to a sequence, or from a start to a finish (A future exploration of the term “glide” beckons), but more in the manner of leaping, associating, . . . Fecundating Rotational Clusters.”  There you go then.  Concurrent with this interview I am, to borrow your term,‘archaeologizing’ “glide.”  Viewing the above, what would be appositional to a sequence, a step by step?  A “glide” would.  Instead of the “walk,” the “skateboard.”  Exploring “glide,” I turn to my former applications for source material, i.e., “tenebraed to mermaid” arises as a likely candidate, for I visualize mermaids as being rich in glide & the line “two-world strider slippering through wave-lap” morphs (properties of ‘importation’ & ‘mutation’ discussed in tenebraed & Wrack Lariat) into (still under construction, now just a working line) “stride slipper wave-lap plasmic guttural swirl.”  The imports exemplify how the language is always in motion, always lusting to reproduce & to selectively off-spring.  Will “tenebraed to trespass” reveal fresh information? “tenebraed to step?” “querying oscillative from collapsible cordon?” This is how I pursue the quarry.  Relentless seeking to embolden.

Jonathan: How much of “glide” relies on “glide”, as it seems, mechanically speaking, glide might also rely on “phonemic impulsivity”, albeit one of extemporaneity (which is itself a form of “glide”), and glide of course is both the consequence and the action of momentum. As an analogy, we might imagine a hang-glider maneuvering abruptly, being propelled into a new slipstream, the maneuver is not glide, but is steering, no matter how impulsive and ineffective.

Heller: It was not my intention to suggest that “the Hinge relies on glide” nor do I wish to attach any attribute to Hinge.  I may wax lyrical about Hinge singing it is ‘whirly not burly, loopy not droopy,’ but that is different than encumbering a flux with a role or a reliance.  I merely wanted to answer your question as to how a term is chosen.  ‘Glide’ emerges as a term more in keeping with our trajectory than ‘series’ or ‘sequence.’  The terms you’ve introduced – impulsivity, extemporaneity, phonemic impulse, the action of momentum – are all apt.

Jonathan: So to encumber a flux with a role or reliance is against the principals of Hinge. I see how this is in keeping with the liminality and motion of language. Relatedly then, there is noticeably more of a narrative earlier in your Hinge work than in your most recent work, which is weighted more heavily toward phonemic connection/ construction, would you say that's accurate, and was this a conscious decision?

Heller: As I pointed out in Part 1, my attention has been drawn more & more toward the Linguistically Undocumented, those ‘terms’ currently deprived of sufficient recognition.  For a narrative-oriented work such as “from Buffalo this Indian,” I had available over seven books to study (see Wrack Lariat, p.163).  To pursue a poetic dissection/exploration of the term askew, where would you turn?  I searched Amazon for books on askew & the first that came up was The American Church Experience:  A Concise History.  With little material to go on, I was compelled to turn to applications arising from my own most recent publication, tenebraed:  “tenebraed to disarray;” “tenebraed to disparity;” “tenebraed to tangle” (to cite a few).  Wouldn’t you love to see a book devoted to examining “askew” in all its shades & perambulations?

Now permit me to reverse the role of the interviewee & play the interviewer:  Could you visualize a methodical multi-pronged & extensive investigation of “askew” constituting a narrative?  If so, how would it look?

Jonathan: By narrative I am of course referencing your "flute carved from the wing bone of a red-crowned crane" (Wrack Lariat) which is, admittedly, less about fishing & exploring, “UnCovering”, as you put it, and more about a series of thematic connections (which as discussed in Part One, can be found in a YouTube video of you reading and contextualising this material from Wrack Lariat). But to answer your question head-on, yes, as someone drawn to Hinge, I would say that if askew were a word I had discovered uncreatively (from an archive based on pattern and context), I could visualize a methodical multi-pronged & extensive investigation whereby narrative-forming would be intrinsic. The example I will give comes from a recent project I have embarked upon whereby I am interviewing various subjects about key moments in their lives. The project is predicated by a fascination I have of how we experience “new identity”, especially linguistically. The idea is to intersperse the interviews to create a portrait of a group life, whereby the experience of new identity becomes the narrative, the story, and the agent. The idea is to explore personhood through poetry practice and what it means in a posthuman innovative environment. It is about new identity of poetry as well and will incorporate techniques from innovate and realist schools, but Hinge, I believe, will be a vital component. I want to explore how remarkably brave people are empowered through their language. So far I have three subjects, one of whom is an 85 year old lady who recently came out as queer, though has never acted on her desires, who was awarded an MBE from the Queen of England for her career as a nurse, who attended the final weeks of Ruth Ellis’ life, the last woman to be executed in Britain (in 1955 she was hung for the unremorseful shooting of a war hero and successful businessman with whom she had been in an abusive relationship, scandalized for having had multiple abortions, working at a London club as a hostess, being sexually involved with a string of married men).  And, my subject is from an especially impoverished area of the city I live in, an area recently labelled the “sex work capital” of the UK. So you can see from the above how Hinge is already at play, the linguistic possibilities waiting to be uncovered.

If, in light of the above, I came across the term or idea of “askew” in one or more of the transcripts and were able to map its significance and growth as a linguistic ingredient of New Identity, I would of course be exploring it, ‘archaeologising’ it, tinkering with it, and let it lead for a while, so it would become part of the narrative. I hope this answers your question, Heller?

Heller: This is most interesting as, if I understand you correctly, you would be emplo(y)(r)ing askew to serve as an active agent among other active agents striving to establish an identity construct.  My approach, on the other hand, would be to establish an identity for askew whereby it will emerge as a subject comparable to your 85 year old lady.  Once “askew” has been en-fleshened into subject matter, it will “lead” with confidence, robustly integrating into your narrative.

Jonathan: I would say the “subject/term” in the example I use is the experience of new identity, therefore the woman I mention would be closer to the “application”, and “askew” (if it presented), could be another application, etc. Here, I am attempting to reframe what it means to conduct an interview—by rendering ego (whether that of the interviewer or interviewee), completely useless, hence why I term it an Exīrview (from the Latin exīre, the present active infinitive of exeō (“I exit, I leave”)).

Heller: Which is a prototypical example of Hinging, the Ego Dissolving to enable full Encounter to/with the Subject. “Exīrview” as a Hinge Event.

Jonathan: Yes, absolutely, Exīrview would be the Hinge Event. So, to clarify, the subject and the narrative are intrinsic here.

Heller: This is Hinge at work:  A term becoming Em-boldened &, through context-hopping, emboldening further terrain.  At the same time, of course, “askew” prospers from the newly-situated fertilizations, a bi-amplification.  This is how we roll along.

To deepen the exploration, I would invite long standing Hinge partner and visual artist, Linda Lynch, to weigh in.  Linda, would you care to comment upon “askew,” and how would you approach it from Hinging the visual?

Linda: Thank you both for this fertile conversation, which in itself is a manifestation of Hinge.  I return to Heller’s point of “being available.” To approach askew is to allow askew.  This means becoming present with the term non-directionally, allowing the term to “be” and also to ask “what is the ‘idea’ of askew?” and to attempt an answer, or multiple answers, with the least amount of imposition.

For me, it is about locating – not creating – but locating a point of visual connection with the term.  This is where not only being available comes to bear but stepping aside is required to allow rumination of the term, or application, to find its visual connection.  My role becomes that of receptor, or neuron, simply conveying natural links.  In this way the works find each other, and then we see and learn after the fact what they reveal in their own dynamic by coming together.

My particular approach to drawing is non-linear from the standpoint of it not being something that occurs necessarily as one event leading logically to another.  It is not narrative nor does it illustrate anything other than the history of its own making, though like language under the auspices of Hinge, it can employ “visual terms” to break open fecund ground.  In this way my visual process becomes a natural and fluid tributary of Hinge.

But then we find that Hinge applies indiscriminately to any medium, allowing for everything to be elementally released from unnatural limitations.  Life is non-linear, occurring facet upon facet simultaneously rather than unfolding in neat story lines, so the desire to organize our experiences becomes a futile exercise. Why should our language and art not reflect this? 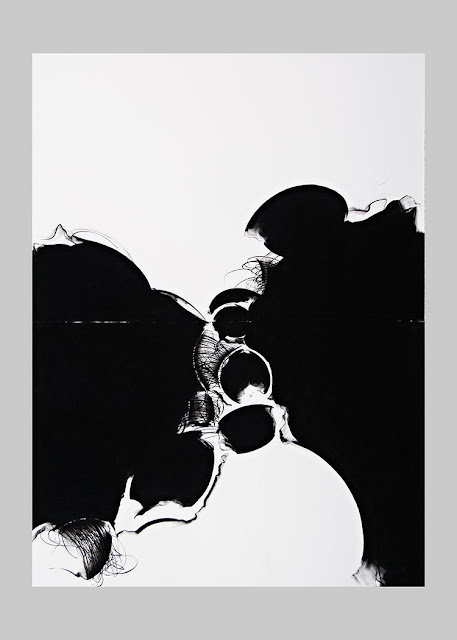