Felino A. Soriano, from Sedentary Fathoms 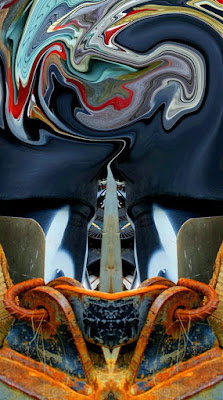 Ark of the Covenant, image by Daniel Y. Harris

Alone, I said what I needed: breath
burned
broken
buried within speech            within speckled adulation.  As
you arrived my
silence
curled in
-to an ornate rendition of abbreviated
hearsay: your knowing cannot
fathom
what my closed mouth, though
filled with the jazz of a dragonfly’s abscond¾

wondering of a deity’s circular affirmation

Incinerated noise,
return of an incomplete ghost-,
mine, or what isn’t yet
fully my skeletal-history

particular brands of inertia have left our welcome

this
is the age       my father returns                             one year following fragrance of his unexpected absence, surname erasure left
to ornate the writing my right hand uses to display my own generational
identity

soon my mirror will recognize me, again                   its radial syllables spelling
focus onto what is meant when the
dragonfly returns amid tamer turquoise
attire, softened, a flight-whisper ornamentation and
the whole of my healing will delve into explanation,
philosophy of unimpeded identities

Older, we were
¾was it when the wind died
toward ground’s brown, unwat
-ered signature?  We signed ourselves
with surnames’ routine emphasis.  Recall the patterned interpretation of
contoured     syllabic
affirmations?

Age is
what accompanies us in a paralleling math; prose, too,
its synonyms found as we excavate
last year’s meaning
last mentioned during a death
awareness of a hymnal reenactment

After what was left
us
nothing spatial can
ignite an eyeing rendition to
multiply
or
configure improvised digestion, capable modalities of tonal continuity.  Trigger fallacy     tightened figments
ornate and subtle
criss
-crossing the good eye going gray     going unintended.

As if it were to memorize me,
such illness discolored my fingertips my
involvement with a faithful touch of language of layered pianoing.  Awakened now though I am,
was it only for the months dedicated to an eye-chase of moths discovering
pigmented nuances of this summer’s exterior normality     pluralized

But ending, why say it?  It?
Stated, this is what ornamentation means when allowed to December itself
within a mirror of recollection and
documented cliché.  When ending
what uses an olden recovery tool: wound/heal/pink-rise(scar) philosophy intellect.
Said of the jazz earliest
come first, morning served, paused causal newborn elation, the smile sleeps only when the body expands and reconfigures the why of inventive beginnings

Each piano around me splays tongue
reaches my inward glare toward a mirror of
reaction and accidental consequence.

Said of my listening, what was wind
my thinking yelled within the confines of silent
breath holding paused hands.  Predetermined
speech    the break of syllables
arranging what time meant when stopping
prior to death or the advent of a communicating
behavior.  Language, desolate.  Longtime desire
a neoteric stone halved in heaviness and the absence of tolerable commitment

Felino A. Soriano was awarded the 2017 erbacce-prize for poetry.  His writings appear in CHURN, BlazeVOX, 3:AM Magazine, The National Poetry Review, Small Po[r]tions, and elsewhere.  His books of poetry include Acclimated Recollections (2017),Vocal Apparitions: New & Selected Poems: 2012 – 2016 (2016), sparse anatomies of single antecedents (2015), Of isolated limning (2014), Pathos|particular invocation (2013), Of language|s| the rain speaks (2012), Intentions of Aligned Demarcations (2011), In Praise of Absolute Interpretation (2010), Construed Implications (2009), and Among the Interrogated (2008).  His collaborative collection Quintet Dialogues: translating introspection, which features visual art from David Allen Reed, is forthcoming from Howling Dog Press.

Visit Of the poetry this jazz portends for more information.
Posted by X-Peri at 8:15:00 AM