Adam Fieled, On the Schuylkill and To Satan 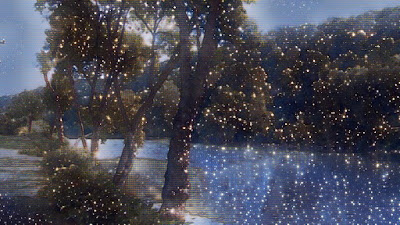 On the Borne by the river’s back, boat-legions rolled
in search of commerce, bridges to build;
souls, cargo (heavy, light), bought & sold,
coffers waiting in Philly to be filled.
Ladies leaped gingerly onto green banks,
bound in satin or lace, versed in politesse or no,
& walked rote patterns, inscribed insignias in the air;
crew-ship kids, underlings already in their ranks,
sought to make the landing show-offy, slow,
hulked a hundred yards from a drunken fair.
Add a century, an Expressway looms over
the murk— wave-sounds, squeals, & metal—
which the cannot answer, hovering
under— slow-moving, patient, & settled.
The river’s mind is limpid— the human race
churns around it restlessly, adding bodies
shorn of dignity, bloated, pulp-bloody, blue,
having carried burdens the river never dreams
of, emptiness so incorrigible the ’s face
registers nothing but disinterested waves— tender, true.
The Over-brain, peering in, questioning, elevates
the ’s mystery into frozen heat—
truth & beauty buoyed up in the browning, decay, fate
of all water-bodies prone to human meat—
I sit on the edge, watching overhanging leaves,
frozen myself by the gross negligence
of what lies beneath the river’s surface,
& my own, as the summer sun inverts, grieves,
for the masses, exploring no penitence
as I am, grounded, here, & diving for purpose—
To Satan
Let it not be said that his rhetoric drifts
out of focus on Earth for a casual minute—
nor that just retribution is not terribly swift
for those who disrespect his intimate business;
as the new mother, tethered away from her child,
meths up, eats what she doesn’t want
to mortify dread that she might be other
than a perfect Satan’s gofer, brainwashed, wild—
infanticide-schemes, inverted taunts,
floorboards arranged under carpets, defiled.
Pentagrams engraved on truth’s justice-seats,
masks woven wanly of paint-wearing flesh;
abattoirs littered with poison-dwarf sweets,
histories chopped out for infants, near death;
what are they scripting of filth, for what?
That all the false idols, set in a line, might dance
tangled, backwards, to all that lends dread?
How is he drifting? He’s straight, he’s shut
against any heart holds a heavenly chance
of imposing their visions, getting bardic in bed.
You’re a ruddy old Big Man Downstairs, you,
fibs so jejune I can’t hear but to laugh—
your buttons are pinned upon somebody who
mistook all the fame for a fortunate path.
Why governments swoon before truth is clear—
you set the bar too high, and low at once,
no innocent cleric can face all the dumbness—
why all of these drones from downstairs, not here,
can’t spit out a lick out of being a dunce,
define for the ages what being a bum is.
—Adam Fieled
Posted by X-Peri at 9:12:00 AM