Steve Benson, Three pages from IT 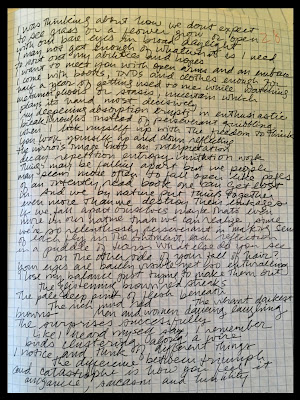 Three pages from IT

I was thinking about how we don’t expect
To see grass or a flower grow or open
With our bare eyes in broad daylight
I may not get enough of whatever it is I need
To sort out my abilities and hopes
I want to meet you with open arms and an embrace
I come with books, DVDs, and clothes enough for
Half a year of getting used to me while watching
Metamorphosis or stasis, unsure of which
Plays its hand most decisively
My deepening absorption erupts in enthusiastic
Breakthroughs instead of perseverant quibbling
When I lock myself up with the freedom to think
You look yourself up and down reflecting
The mirror’s image into an interpretation
Decay repetition entropy imitation work
Things may be falling apart but we people
Seem more often to fall open like pages
Of an intently read book one can get lost
In. And we by nature put things together
Even more than we destroy their linkages
If we fall apart ourselves maybe that’s even
More in our nature than we can realize, since
We’re so relentlessly perseverant in making sense
Of each fly in the ointment, each reflection
In a puddle of tears. What else do you see
On the other side of your fall of hair?
Your eyes are barely visible yet so enthralling
I lose my balance just trying to make them out
The glistening brown red streaks
The pale deep pink of flesh beneath
The rich mud red         The vibrant darkest
Browns               Men and women dancing laughing
The surprises successfully
Like I heard myself say, I remember
Birds clustering along a wire
I notice and think of different things
The difference between triumph
And catastrophe is how you feel it
Arrogance, sarcasm, and humility 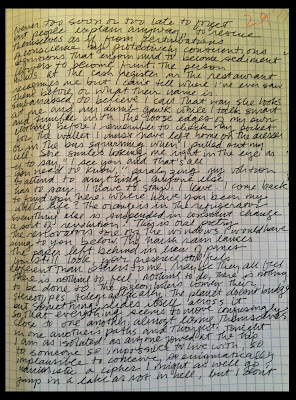 Never too soon or too late to forget
But people explain anyway, to rescue
Themselves as if from perturbations
Of conscience by protectively conscientious
Cognitions that enjoin mud to become sediment
Flowers to become fruit. The person
Who’s at the cash register in the restaurant
Recognizes me but I can’t tell where I’ve ever
Saw them before or what their name is
Embarrassed to believe I call that way she looks
At me and my dumb gawk while I talk smart
And fumble with the loose edges of my own
Clothing before I remember to check my pocket
For the wallet I must have left home on the dresser
Or in the bus squirming when I pulled out my
Cell. She smiles looking me right in the eye as
If to say, “I see you and that’s all
You need to know,” paralyzing my volition
To attend to anything anyone else
Has to say. I have to stay. I leave. I come back
To find you here. Where have you been all my
Whole life? The orange is in the refrigerator
Everything else is suspended in constant change
A sort of revolution. This is oral poetry
The renovators tore off the windows I would have
Sung to you below. The harsh rain lances
The paper left behind in lieu of panes
You still look, your presence still feels
Different than others to me. Maybe they all feel
There is nothing to feel, nothing to do, there is nothing
To be done to. The pigeonholers convey their
Stereotypes telegraphically. The planet doesn’t budge
But something slides itself across it
So that everything seems to move confusingly
Close to one another, almost losing themselves
In one another’s paths and thought. Tonight
I am as isolated as anyone joined at the hip
To someone so impossible to live with, so
Implausible to conceive, so enigmatically
Narcissistic a cipher I might as well go
Jump in a lake as rot in hell, but I don’t 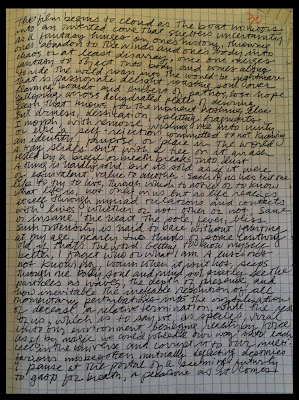 The film begins to cloud as the boat unmoors
Into an inverted cove that shelters uncertainty
As a fantasy hinges on one’s history, throwing
One’s abandon to the winds and one’s body into
Chaos or at least disarray, once one merges
Fantasy to object into body and comes along
To ride the wild roan into the would-be nightmare
That is passionate delight roasting soul over
Flaming boards and embers of pathos, lost hope
Galloping across dehydrated plates of desiring
Flesh that knows for the moment nothing else
But dryness, desiccation, splitting fragments
I morph, with remorse wishing me into unity
Or else a self-rejection, committed to not knowing
An identity, purpose, or place in the world
A tray slides out with a tree on it, an ash
Tested by a breeze or breath breaks into dust
A thing is hardly solid but it’s sold as if it were
Of equivalent value to another. Each of us has but one
Life to try to live, through which to notice or to know
What life is, not only in us but as life realizes
Itself through myriad relations and contacts
With lives, whether or not other or not, sane
Or insane, the heart, the sole, fever, bliss
Such intensity is hard to bare without fainting
At my age, nearly two-thirds of some century
Old if that’s the word. Getting to know myself
Better, I forget who or what I am. A luscious
Not knowing, warm when it isn’t hot, seeps
Through me body soul and mind so I quietly seethe
Particles as waves, the depth of presence, and
How inevitable the ineffable resolution of all
Momentary perturbations into the crystallization
Of decease, a relative termination, while the rest
Of us, which is to say we, as species, viral
Unto our environment, besieging reality by force
As if by magic we could wheedle our way into each
Cell in the universe and corrupt it to our multi-
Farious misbegotten mutually deflecting destinies
I pause at the portal of a seeming futurity
To gasp for breath, a pleasure as it comes