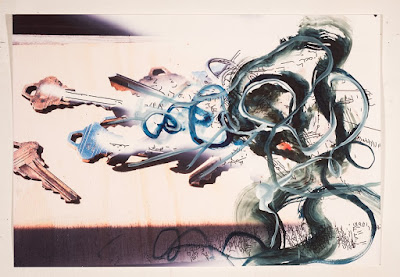 It Was Transformative He Said

It’s hard to say why I am settling
For this damaged parsnip, he said
Hard to say how much habit in smoking
Aspires to be repeated, as any charm would be
Legs, legs, legs, without which we would not walk
What’s the urge, or the contest, he wondered
Where’s the boots on the ground and what
Are we fighting for, a failure to digest our experiences
Though we keep forgetting it
You can’t be other than yourself
So you’d better say so, he said

Originality in fending off delights of this world
All the named things loom as if not penned in
Suggestions of encounter, as if a taboo on images
All the smoke and mist penetrating the borders
And then an innocent girl appears, full of carnal delight
Seemingly endless and remote
Then turn around and take three steps to the left
How do you come up with that stuff, if not in transit
If it’s cold just put on a sweater
Limits of the known, some street in a city seen from above
The sights are impressions you have, all one the world
The same place, if you are there

A cold, calculating aroma at the edge of some semantic street
Narco traffickers delight in their delicate decisions
I hope you know what you are doing
If I go with you it better not be asbestos all over again
But I’m not trained in that
I must be trained in that in order to represent
Alas, if you go who is going to replace you
The hill, now smudged in mist, the trees now gray

Represent emotions by things, my philosophy is that
It comes to mind, I can’t see it, I veer
Through the open window by the middle of the river
Rain poured in through the roof like it’s not supposed to
And a delirious boy abated the effect of that
Merely by his debatable joy
For one by one the boards bent in the damaging sun
Hard to think that over repeatedly
To return to suitable conclusions
Put that down with a thud, quite a relief
But if there isn’t tunefulness, what’s the use in my tooting?
I’m just not clear on how that will play out
So we’ve rearranged the furniture again because there is too much of it
A picture of a man on fire holistically breached
All manner of decorum, listless in the gym
Counting by twos or threes the qualities of friendship
What makes life meaningful and alert

I’m still hung up on meaning
Though not knowing what I mean by that
Sally’s all heart, I know that
Sally’s all feet, all nose, all ears
Something over there must be broken
Otherwise there’s no explanation
If it’s broken it’s yours
If yours must not be remembered
Because bespoken or demurred
How we spread our blanket at the beach
How the waves rolled in however small
In veneer is testimony tested
It’s by your action that your word got caught
In a cabinet of mirrors

Social whirl in a social world
By the total shape that made it
If I’m me I can’t be other
But how it got like that
Is anybody’s guest
About a crime: it’s always solved
Good cops get their guy
Not commandeered by a big guy’s meaning
Just a woven mat at the door
Allowing for how I want to call you
Letting the good rain damp all that
On forests in their quest for cover
A radical shift in the action, I’d say
A rhetorical pause in the pas-soup dark
Drop by drop is time’s dilemma
That all things pass is a simple quote
Or if they don’t my leather briefcase
Is a final line, it’s all she wrote