Nathan Spoon, Punctuating Erasure Space: A Review of Derek Beaulieu’s a, A Novel 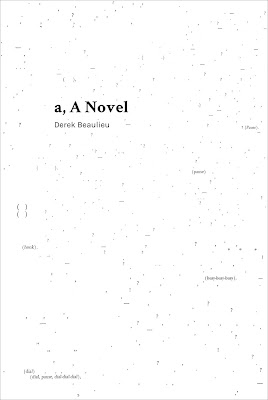 with an essay by Gilda Williams

Punctuating Erasure Space:
A Review of Derek Beaulieu’s a, A Novel
by Nathan Spoon

A few weeks ago, the poet Christopher DeWeese asked Twitter for examples of poets and fiction writers known for using punctuation as a form. Some examples tweeted in reply were: the dash in Dickinson, “the colon in Ammons and Schuyler” and “the unredacted/unerased comma in Solmaz Sharif’s “reaching Guantanamo” series in Look.”

While these are examples of poets making use of one or another specific piece of punctuation, Toby Martinez de las Rivas, in a poem appearing at the end of his debut collection, Terror, gives a brief example of an approach that is closer to a, A Novel considered below. It makes use of parentheses, commas, periods and a colon. There are two sets of parentheses, one as the beginning and the other at the end, providing the poem its general orientation, and the word “clouds” (the only appearances of the poem’s only word) appears in italics between each of these sets. Given the nature of the other poems in this collection (experimental and modernist, although not at all postmodernist), and especially considering that he has isolated this piece by placing it after the endnotes, it is likely that Martinez de las Rivas is identifying the importance though rarity of his postmodernist experimentation.

The frontpages of Derek Beaulieu’s a, A Novel announce it as a work of uncreative writing, which is to say a specific kind of postmodernist experimentation. Uncreative writing connects conceptual poetry to Marjorie Perloff’s observations of unoriginal genius, a notion that broadens understanding of genius beyond that of the mysterious and idiosyncratic individual. Kenneth Goldsmith zeros in on how “Perloff has coined a term, moving information, to signify both the act of pushing language around as well as the act of being emotionally moved by that process.” Beaulieu’s approach certainly fits with this.

a, A Novel erases a pre-existing Andy Warhol text (which had the same title) except for “punctuation marks, typists’ insertions and onomatopoeic words.” While usually considered the core of written language, the alphabet, in this text, is used sparingly, while punctuation is brought to the foreground as the active element; and there is an array, including periods, question marks, exclamation marks, ellipses, dashes, commas, asterisks, parentheses, quotation marks, virgules and dollar signs.

Even without seeing the original, it is clear from what remains that Warhol’s book was a careening experiment. For example, with the words erased, it is easier to see the cluster of questions marks located in the bottom left corner of the first page. There is much to be appreciated from clusters of punctuation such as this one. If the distance between one question mark and the next is only enough to fit a single word, it is easy, to wonder, what was the word? Due to the morphic nature of language, imagining one possibility leads almost automatically to imaging many others. Similarly, as in an instance of humorously filling in the dialogue of two or more people who can be seen conversing but cannot be heard, a reader might imaginatively fill in the words between the exclamation marks near the end of this work.

The onomatopoeic words, which appear from the opening page on,

provide a felt sense of Warhol’s original text. As a reader progresses through Beaulieu’s uncreative rendition, these remaining words allow at least hints of various scenes and scenarios to come into view.

Although the “(cab driver)”, who appears on page 289 near the beginning of chapter thirteen, seems to be an exception, all the words in this text are related to sounds (or the degrees of specific sounds in relation to silence, pausing and interference). There is an interesting contrast between sound and silence, on the one hand, and alphabetic language (erased to the point it is ancillary) and punctuation marks (usually ancillary), on the other. At any rate, these are some of the broad ways the “moving information” of this text is presented.

A central aspect of an erasure text to consider is how the original text is a persistent presence in the subsequent work, even if it is present as pure ghost, although it is anything but ghost in this case. More has been retained than the elements mentioned above. Things like page count and chapter divisions have also survived Beaulieu’s excising touch, so that a, A Novel gives the appearance of having a beginning, middle and end, since it opens with the number one, denoting the “beginning” of the first chapter, and closes with a period at the “end” of chapter twenty-four, although it is as much “all middle” as any rhizomic work.

Another way of approaching this text is to move over the pages until an arrangement or pattern catches the eye, and then to move around the page before going forward (or backward) in the text looking for patterns and repetitions. Of course, these patterns and repetitions might appear either complimentary and harmonious or oppositional and dissonant. In fact, by focusing on its typographical elements, this work can be read as a novel-shaped concrete poem.

This text can also be viewed or read as the literary equivalent of a gigantic leaf skeleton. As an observer can both see and see through the remnants, so a viewer or reader of Beaulieu’s text both sees and sees through it. The blank spaces left by the act of erasure can also be read as silence so that both the space and the silence can be interpreted as a void. As mentioned, this void may be waiting to be filled, whether seriously or playfully, by a reader’s imagination or it may resemble to the static quality of an icon.

At once wasp to Warhol’s orchid and orchid to Warhol’s wasp, and despite how daunting it at first appears, the further one reads into Beaulieu’s a, A Novel, the more oceanic it becomes.

““Inorganic, Yet Alive”: How Can Deleuze and Guattari Deal With the Accusation of Vitalism?”, Leslie Dema, Rhizomes: Cultural Studies in Emerging Models, Issue 15, 2007