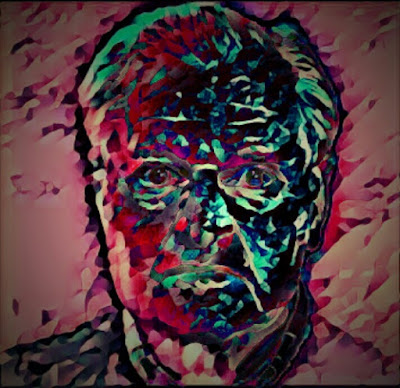 
Witnessed in the Convex Mirror: Betrayal with Brand Names

But there is in that gaze a combination
of tenderness, amusement and regret
She does not know his first thought when
he finds her in his bed with another
lover’s hands roaming the terrain she
had promised to be his monopoly—
a country that elongates itself like
Argentina or Chile from Bolivia as it
falls from lips puffed by Sisley Hydrating
Lipstick shaped into a beveled spiral bullet
to better apply its vitamins C and E as
anti-oxidants, plus Calendula for softening
Happily, his hands had tilled that land with
Kanebo’s Sensai Premier Body Cream
crafted from Chinese Mulberry shrub
Japanese seaweed and Moon Flower
Fragrance. He shows no anger, simply
turns and leaves the room while she and
the other betrayer scramble for clothes
Dressed, she dashes from the bedroom
and, opting for offense as the best defense
charges at him, “What about ____ or ____?”
The specific names of his lovers do not
matter—what matters is the mutuality
of betrayal. Thus, he shrugs as his thoughts
turn to the Cire Trudon Odeur de Lune
Candle in his briefcase. He had looked
forward to sharing it with her that evening
to test the veracity of Maison Trudon’s claim
that it offers “a composition imagining
the scent of [a] satellite orbiting around
the earth.” Apparently, such a scent involves
sulfur, black coal and a metal infusion
When he finally speaks, she is mystified
Distantly, he observes, “It’s rare for a
product to embody its glossy marketing”

Witnessed in the Convex Mirror: A Spy Story

Of the mirror being convex, the distance increases
significantly until, unexpectedly, you are intimate
with a sailor—might as well kiss!—when minutes
earlier your gaze toward his direction snagged on
the barely there tip of a ship’s prow interrupting the
horizon. If convexity brings you someone to kiss
what’s not to like? But the sailor backed away with
a grimace before your lips could find land, remind
-ing you yet again that the speed of sight does
not always match the impulse to give everyone
the benefit of a doubt. As you efficiently (albeit
sadly) slip the wand-thin stun gun from your garter
belt designed by SiuSiu in Macau, you console
yourself with the thought: a true sailor would not
turn down a kiss. SiuSiu’s garter belts are lined
to prevent X-ray machines from revealing its
tools, of which some are crafted from plastic
polymers strong as steel but undetectable by
even the most hypersensitive metal detector
Positioned next to the stun gun are a screwdriver
lock pick and a combination hacksaw/pry bar
The clips at the dangly straps of your garter
belt conceal a button-size flashlight, a locator
beacon and 200 feet of dental-floss-thin, 250-
pound rated cord that could be used to rappel
down as much as 19 stories, a length determined
by space considerations coupled with the theory
that if exit needed to encompass more than 19
stories then you could break through a high-rise
window or find some other alternate means of
descent by the time you reach, if you will, the end
of your rope. No need to reveal what happened
after the stun gun kissed the hairy nape of the
false sailor. The moral of this story? If you wear
for disguise a dark tan and a white sailor hat
with a blue anchor embroidered nattily on
its upturned brim, never reject a kiss from
a spy wearing nothing but fishnet stockings
and scraps of black lingerie, like the strapless
bra offering up breasts more than the eyeful they
actually are, and where freckles emphasize
the skin‘s creaminess, proverbially “like buttah!”

—After The Ultimatum by Karen Robards (Mira Books, Ontario, 2017)

Witnessed in the Convex Mirror: For Charlie Gard

A housewife doing chores. Impossible now
to restore those properties in the silver blur
of disavowing corporations as humans, a lie
from a condition precedent of normalizing
marriage to a house. This poem does not
mean to insult the same culture that begot
lives of men as one of “quiet desperation”—
this poem simply grieves over Charlie
Gard, indisputably human though he could
not hear, see, swallow … surrounded by
stuffed bears and monkeys and clad in
a blue onesie festooned like the sky with
stars, the 11-month-old was human though
he could not cry. Such speechlessness
meant his doctors could not prove Charlie
was suffering, even as his parents could
not give up hope: Charlie suffered from
mitochondrial DNA depletion syndrome
But something is missing in all of us
an absence that clarifies our humanity as
we despair, as we are unable not to hope
and as we refuse to cease searching
for redemption, accustomed as we have
become, to night collapsing before day

Witnessed in the Convex Mirror: The Lost Context

As Parmigianino did it, the right hand
bigger than the head, thrust at the viewer—
reveals the complication of grabbing
someone’s attention in the way one wants
to achieve attention. We all want to remain
the child who would draw a green dragon
or blue banana or yellow stallion and
not only receive but know to anticipate
with confidence the consistent response
“Wow! You are so talented!” Yet another
adulthood complication: the diminution of
mothering until you, who thought yourself
still a child, suddenly becomes the Mama
with the beaming smile and ready reaction
“Wow! You are so etcetera … “ Diminution—
such a diminishing experience. Thrust at
viewers in the beginning now lost in the back
-ground that is the fate of history, the hand
swerves at the foreground of the Now from
which consequences proceed. Maturity
counsels distrust in any call for recognition—
you either do or you don’t and discourse
becomes excuse, or worse, apology (who
wants pity?). Parmigianino: so much must
lurk in your heart as you fight off the growing
darkness: the fur loses its pleasing sheen as
it becomes one more element bypassed by
a gaze exhausted with questioning itself

Witnessed in the Convex Mirror: Art Foretells Even a Typhoon

It happened while you were inside, asleep
The penguins now grieve over the escalation
of silt in their bath. A mother begs a child
“Let go. I won’t survive, but you can!” But
the child will not survive this last image
of a mother forcing a smile to lessen
the impact of her sacrifice; the smile worsened
the ordeal, of course. In his future, the child
shall weep at the sight of Parmigianino’s
Madonna—her stretched neck will evoke his
mother elongating her neck to try to breathe
above waves. Typhoon Haiyan broke families
as the largest storm ever recorded on land
That the child will sight the painting as
a reproduction will not diminish the impact
of a work designed by its artist to break
inherited conventions of “beauty.” Harmony
the moderns chided, is not the only possible
solution. The child will understand a body
depicted to emphasize what is significant
No wonder piano sonatas stuff themselves
with conspiracies, before designing
versions intended to waft through churches

Eileen R. Tabios loves books and has released about 50 collections of poetry, fiction, essays, and experimental biographies from publishers in nine countries and cyberspace. Forthcoming poetry collections include MANHATTAN: An Archaeology (2017); Love in a Time of Belligerence (2017); and HIRAETH: Tercets From the Last Archipelago (2018). Inventor of the poetry form “hay(na)ku,” she has been translated into eight languages. She also has edited, co-edited or conceptualized 12 anthologies of poetry, fiction and essays as well as served as editor or guest editor for various literary journals. More information is available at Eileen R. Tabios.