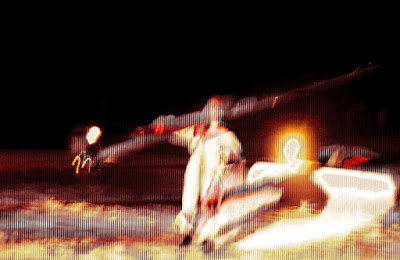 clube four four nine open non-stop 24/7,weeklong. the club samples nice colours, sieved blues, topazes, white as from sautéed ice, london mists, flares and sparks as as well meteorologic as mediumnistic plateformes. a clown de luxe either, or, aphrodite, time nor space nor gender still serves as denominator all such qualifications prove remnant, atrophiated, out of order. here all sits in the athmospheres and to poetically dwell around these inbetween veils and dimmed light utensils which can also be the earths' exsudations out of its fumaroles with odeon radon neon dynamone noble gaseous presentisms so short so ephemereal embedded in an orangeade of petitgrain bigarade and l'absolu d'eau de brouts expanding as regal dispigmented shockwaves gently olphactorily along, out of these materials this world is build up and it is there as it is dismantling, such is the brittleness of a diana goddess of the forest (ok the hunt) or of a leda, she of the swannery in sussex. here the summer has begun and the evening still whirring in warmth ahaute très très dior haute plafonnière above us of compressed yet expanding air,let us call it a breathlessness of what was seen. it is a dôme of ecclesiastical brick to brick movement up like a mary quant eh mary poppins going up umbrella'd as that was the flying device she went up with. yet here a sacral figure is lending virtues and meritorious pellets to the visitors whomever it may concern and some sparks near the floorcovering (of mysts) show tendencies of appearance yet also with the curve for come-back, the possibility of the adjacent rooms as the image is borderless and seems to travel walless as well as footloose. no fee at clube four four nine. 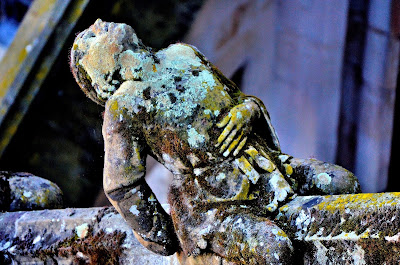 miserere -  a psalm in which mercy is sought, especially Psalm 51
https://youtu.be/IA88AS6Wy_4  |   this vocal complaint or lament,
a vocal then as well, as we see here, gestural, lament. miséricorde.
La miséricorde est une « forme de compassion pour la misère d'autrui »
qui, par extension, peut définir une « générosité entraînant le pardon
[a generosity following the forgiveness], l'indulgence pour un coupable
[for the indulgence in affluence], un vaincu [a victory]». Miséricorde
est aussi l'arme secondaire de Mercy/Ange dans Overwatch. [weapon]
Miserere (full title: Miserere mei, Deus, Latin for "Have mercy on me,
O God") is a setting of Psalm 51 (50) by Italian composer Gregorio
Allegri. It was composed during the reign of Pope Urban VIII, probably
during the 1630s, for use in the Sistine Chapel during matins, as part
of the exclusive Tenebrae service on Holy Wednesday and Good Friday
of Holy Week. Mea culpa is a Latin phrase that means "through my
fault" and is an acknowledgement of having done wrong. Grammatically,
meā culpā is in the ablative case, with an instrumental meaning.The
phrase comes from a prayer of confession of sinfulness, known as the
Confiteor, used in the Roman Rite at the beginning of Mass or when
receiving the sacrament of Penance. The expression is used also as an
admission of having made a mistake that should have been avoided,
and may be accompanied by beating the breast as in its use in a religious
context. (A QUILT OF CITATIONS) in a poem of nonconversational
citations the warrioress-gatheresse disappears behind what dissolves
with the text and as a quilt is as flat as deeply, intricately profound, the
patches sum up to what already has been said. all is done. nothing has
to be done. in not-doing (wu-wei), we follow the path of nature, love